Universities are on a constant mission to prepare students for a competitive start to their careers—especially when it comes to tech. When Oklahoma City University decided to add a program in game design and animation, it needed a laboratory that was as cutting-edge as the subject matter.

Universities are on a constant mission to prepare students for a competitive start to their careers—especially when it comes to tech. When Oklahoma City University decided to add a program in game design and animation, it needed a laboratory that was as cutting-edge as the subject matter. 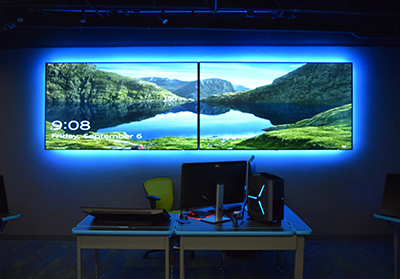 Not many four-year universities offer a program in gaming and animation—so when Oklahoma City University (OCU) decided during the spring of 2019 session to add one, it was largely forging its own path. The curriculum that the liberal arts school envisioned was all the more unusual because it would teach students both the art of production as well as the computer science side of production, rather than keeping the art in a separate silo from the tech.

“It’s a one-of-a-kind deal that they’re building from the ground up,” said Chris Tower, president of Video Reality, the systems integrator that worked on the project.

The university hired experienced digital designer Jeff Price as the instructor. When he taught similar courses at another university, his students went on to jobs at such top-tier companies as Dreamworks, Sony Imageworks, and Midway Games. Students must graduate with impressive portfolios to be competitive candidates at such heavy-hitters—which means they need to create work with professional-grade equipment. Each work station needed its own moderately sized display for students to create their projects, while Price also wanted two large format displays at the front of the classroom for demonstrations and student evaluations.

“We needed really high-resolution screens that would be large enough that they could critique their work,” Price said. “I’m expecting a high-quality final piece; students who graduate with the degree should meet the standard of a game like Call of Duty.”

The lab would also double as the home of the university’s new eSports team—competitive video gamers—meaning that the displays needed to be big enough for players to clearly see the action.

“Jeff had a conceptual idea of how the lab should look,” said Gerry Hunt, Chief Information Officer at OCU. “It needed to meet certain technical requirements, but we also needed to consider the aesthetics—it would be a showpiece for the program.”

There were several key considerations in finding the appropriate displays—for this program, immaculate images are priority No. 1.

“They’re not just throwing up PowerPoints and Excel spreadsheets,” Hunt said. “They’re developing 3-D animations and high-end computer graphics that would go into computer games or big-screen animated films. The displays need to have good refresh rates to keep up. They need to be high-resolution, with very crisp pictures because they’re dealing with highly detailed graphics. And because there would be a lot of monitors near each other, if the color correctness gets off, it’s obvious.”

Like most institutions of higher learning, budget was also a concern. When OCU invests in technology, it must last for a while, so Hunt sought a durable solution.

OCU and Video Reality have long worked with Sharp NEC Display Solutions on projects, including a nine-monitor video wall in the atrium of its music school, as well as projectors in classrooms throughout the campus. Because those projects were so successful, Hunt said the decision to use NEC displays in the new lab was an easy one. Tower agreed that Sharp/NEC would be the right partner for the installation.

“About 95 percent of our designs use NEC displays,” he said. “Between the 4K resolution and the reliability, they make our projects as future-proof as possible.”

As a finishing touch, a series of colorful LED lights illuminate the displays from behind. “There’s a color wheel at the front that lets the instructor choose the backlighting color,” Hunt said. “He can just touch whatever color he wants and the whole room changes. It’s super cool—everyone who comes in the room is super impressed.”

Even before the lab was complete, it was already getting attention around campus. “People from other academic disciplines were coming in to see it, and their jaws dropped,” Hunt said. “This will be a showcase on the tour for prospective students. Already, students are so excited and proud to be able to say they’re taking classes in that lab.”

For the two large displays at the front of the room, Hunt and Tower selected NEC C981Q 98” ultra-high definition commercial displays. The size and 4K resolution ensured that students would be able to clearly see every facet of a project. Highly detailed graphics would be rendered in precise detail, so the class could examine and discuss even the most minute element. They’re laid out side to side so it looks like an extremely large monitor,” Tower said.

Each student workstation is equipped with three smaller displays. NEC’s Multisync E437Q LCD 43” entry level large format displays delivered ultra-high resolution and vibrant, true-tolife colors at an affordable price point. With this configuration, the students could view the same ultra-high definition content at their workstation that was being displayed at the head of the room, regardless of their positioning in the space.

The lab took over a room in the art building that had previously been used for painting classes. It was an unusually shaped space, which posed a bit of a challenge during the installation. Further complicating things, the walls of the room were made of cinder block, which meant that it wasn’t practical to mount the displays on the walls. The installation also had to be completed in a short window of time—between July 1 and august 15, before students returned to campus.

The solution was to create three triangle-shaped pods. Each side of the pod is an independent student workstation with its own independent display. A custom designed truss system allowed the monitors to be suspended from the ceiling. Cables were discretely run through the center of the truss system, giving the whole setup a sleek appearance. A Crestron touchscreen control interface controls the content that can appear on any of the displays in the room. Price can send any video input to any video output allowing him to send the content being displayed at the head of the room to any, or all of the student displays. It also allows him to pull any student content from the student’s workstation to be displayed at the head of the room for all to view. When the room is not in use, room occupancy sensors can automatically turn the displays off and then boot up again as soon as someone enters the room. When the displays are idle but on, they serve as digital signage that shows the OCU logo or a loop of animated 4K graphics. Price said from a technical standpoint, the installation was very simple: “They were really painless. It was plug and play—they worked right from the get-go.”

Price said that his students love the setup both because of its futuristic look, as well as how it helps them engage with the coursework. “It’s great to gather around the larger screens,” he said. “They’re big enough that I can have four or five rows of students and they’re still able to see all the detail.”

For example, one student animated a scene with a moody, muted atmosphere that could have easily become muddied on a lower resolution display. Not so with the NEC displays. “The color accuracy and high resolution helped bring out all the small details,” Price said. “When you have a beautiful 4K image, we’re able to show students how big of a difference every detail can make.”