Kicking It Off: Solidifying a Soccer City with Lynn Family Stadium

Kicking It Off: Solidifying a Soccer City with Lynn Family Stadium

Lynn Family Stadium hosts the biggest soccer games in the area along with other community festivals and events, needed to equip it's space with world-class technology and digital signage that pumps both energy and sound quality into the venue. 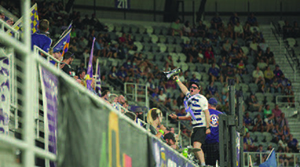 Louisville, Kentucky’s Lynn Family Stadium, which began construction in 2018 and opened in 2021, is the largest soccer-specific stadium in the region with seating for 11,600 fans and a maximum capacity of 15,304. Home to Louisville City Football Club of the USL Championship and the NWSL’s Racing Louisville Football Club, the stadium boasts eight bars, 18 luxury suites, premium seating amenities like club and loge seats along with ledge tables, and a massive safe-standing supporter section.

Also available for concerts, festivals, and other community events, the Lynn Family Stadium is the centerpiece of a larger $200 million mixed-use development that could eventually include everything from hotels and office space, to retail and restaurants.

As a brand new stadium build with no existing technology, IT and AV integrator Strategic Communications started from scratch. Alongside the builder, they consulted on a number of content needs including wayfinding solutions, live game feeds, and menu boards, and landed on Sharp/NEC as the go-to display provider. 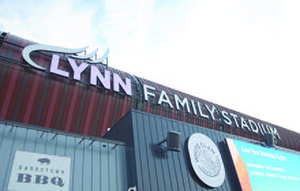 The stadium would need to provide live game streaming so that visitors walking along the outer ring of the stadium don’t miss a beat when they aren’t in their seats. Each of the 18 luxury suites would need a display showcasing a live feed of the game, as well as the stadium locker rooms and training facilities for players and coaches not on the field. The stadium’s restaurants and bars would also need digital signage for their ever-changing menus and seasonal specials. All displays would also need the ability to switch to wayfinding and messaging content for non-game time announcements, including concert or festival branding, and even emergency alerts. Further, with two soccer teams calling this stadium home, the display content would need to be easily adaptable for either team’s branding. Kicking It Off: Solidifying a Soccer City with Lynn Family Stadium The Challenge: Lynn Family Stadium, which opened in 2021 in Louisville, Kentucky, is the largest soccer-specific stadium in the region with seating for 11,600 fans and a maximum capacity of 15,304. As a stadium that hosts the biggest soccer games in the area along with other community festivals and events, it was essential to equip the space with world-class technology and digital signage that pumps both energy and sound quality into the venue. Solution: • (65) 43-inch E437Q displays installed in the stadium’s luxury suites • (34) 50-inch E507Q displays, (12) 55-inch E557Q displays, and (14) 65-inch E657Q displays installed in the bars and restaurants as digital signage and game streams, with a number of displays spread outdoors in between the four corners of the stadium. Result: A state-of-the-art stadium with digital signage that provides game time updates, wayfinding, event messages, and menu boards in an open-air setting. NEC displays help solidify the stadium as the go-to soccer venue in the region and the future of Louisville as a soccer city.

After working with experts from Sharp/NEC, Strategic Communications went with 125 NEC Multisync® E Series displays in varying sizes that would be installed throughout the stadium.

As a stadium that will host championship games and high-profile events, Lynn Family Stadium needed its technology to match the world-class events it will produce. Strategic Communications’ decision to use NEC displays was two-fold. Not only did they know they would get the best quality and performance in a display, but the products come backed with a three-year warranty, an essential offering for the brand new stadium build to ensure a good return on their investment. 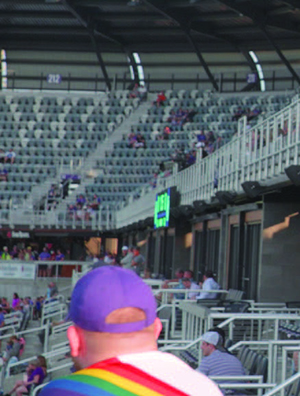 The commercial-grade Multisync E Series displays offer direct LED backlighting, reducing power consumption while localized dimming gives a greater dynamic contrast ratio. As an open-air stadium that hosts events all year round, the visibility of displays is a huge factor. To combat periods of ambient light throughout the day and sun shining into the stadium during different months of the year, it was crucial to choose a display that can showcase bright, sharp imagery and messaging and won’t become washed out no matter how much light it is exposed to.

Now equipped with digital signage throughout, the Lynn Family Stadium is poised to host a multitude of different events and sports teams for years to come. The venue’s digital signage provides vital game time updates, wayfinding, event messages, and menu boards in an open-air setting. The stadium now acts as a showcase “billboard” for Butchertown and Louisville with thousands of people driving past it daily, and sends a strong statement about the future of professional soccer in Louisville.